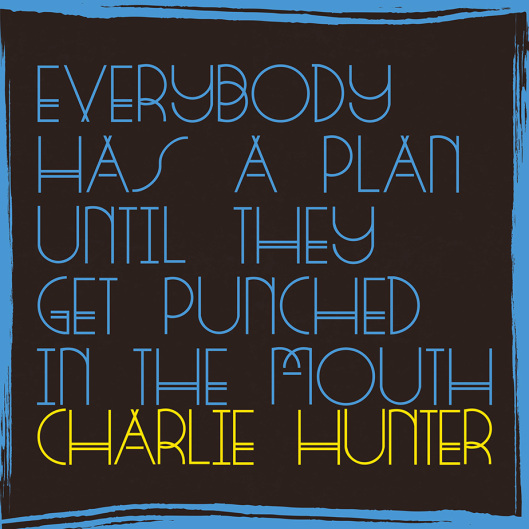 The Joe Satriani’s disciple, the guitar player Charlie Hunter, has showed to be a prodigious with his own style, which was developed after many years of study, tours and record sellings. Hunter is visiting the Festival de Jazz de Nuevo León, but first he talks to Mexican audience about his vision, about his livings and about the way he likes to do it.

Everybody has a plan until they get punch in the mouth. Talk to me about the meaning of this record and what can we hear in this album.

“That record is basically people I’ve played with, if you know Curtis Fowlks and Bobby Kravitz… It’s basically my idea of how would I make a blues record without a singer; all of the songs are quotes the people have said that. “Everybody has a plan” was a Mike Tyson quote and there is a lot of quotes in the record.”

You have a lot of albums. How does a musician get to be so productive, like you? Let’s think about the disjunctive between being an artist and being a business man. How do you get to manage both aspects?

“The business has changed so much and I am always trying to find this way to balance making a living and play music you like. I feel lucky that the music that I play is very blues and groove oriented, and people generally like that.

I just try to make records and try to stay on the road. Some years are better than others. The problem with playing instrumental improvised music is that… I guess if you want to call it jazz you can call it jazz, but it kind of mirrors the business aspects of anything today, and it’s the same in Mexico and US: about 5% of the people get all of the work and all of the money.”

How does Internet and all the late changes in our culture, impact on the figure of the artist?

“It’s interesting for me because I’m old enough that I came up really in the old way of doing things. When I was on Blue Record they were still releasing my records on cassette tapes, you know? Haha! And vinyl and CD. And it’s very helpful to get your career off the ground I think, in that way. But, as time goes by it becomes harder and harder because it’s so youth oriented the idea that you have an exciting young talent and you are going to bring that to the fore front and then when that person starts to develop and get a little older becomes less interesting for them to sell.

I may be one of the few people who can say I like it better now than the way it was then. I think that the way it was better if you wanted to be a star and if you wanted that kind of attention but… I may sold a little money for myself, I made almost nothing: I had a manager, publicity, a tour manager, accountants, I had a lot of people and I was generating a lot of money but I never saw all of the money because everybody else was getting paid before me and I was never big enough to support such a large operation. Now it’s great because I can keep it the size I want and make a living and it’s just me and my IPhone and a booking agent. I like what I do and I like how I do it and it allows me to keep the music the way I want to do it and… And I mean…

I did all those things. I was in a pop band in the late 80’s, early 90’s, we were on tour with U2 and giant rock bands… and I saw all that part of the business and is interesting, but that’s not for me, I don’t aspire to this. And then I was on Blue Note, on Warner Brothers and I did all of those things: the TV, the big jazz festival… and I realized that’s also maybe not so much for me because it takes me away from really bringing the music to people in the middle of the country, who need the music most. And it’s also much easier: you can operate like in a very small boutique, you don’t have to have a gigantic Walmart.”

Why does that people need the music?

“Believe me, I love to play for 5 hundred or a thousand people. I would be making hell of a lot more money than what I am making now and it would still be good. But I go on the road and I play for between a hundred and two hundred people and for me it’s really fulfilling because I feel like every night we really reach the audience. Hopefully, that kind of puts their mind in a different space.

The whole thing with this jazz corporate kind of marketing, which is interesting is that all the people that we revere, if you think back to Duke Ellington and even Louis Armstrong in the early good days, and John Coltrane, Thelonius Monk; these were guys that for the most part toured around doing small gigs and multi night rounds at very small clubs, and that was how the music was made. If you think of somebody like Charlie Christian, he was playing in territory bands, where you would start out from Oklahoma City and maybe you would just play in Texas, Arkansas and maybe you get to Denver every now and again, but would be playing dances. Count Basie was the same thing when they were on the road, this weren`t gigantic corporal events, they definitely had a business structure and they were complex on how they had to book gigs and play gigs, and they had to work very hard and work a lot.

But now you have this kind of almost corporate power structure, where you have big jazz festivals, jazz publications, you have –even more important- you have jazz education, and all of these things are really connected together, and they are basically designed to push one product. If your music happens to not fall with that product range, then you are going to have to find another way to reach people.

As an attendant to that: when I was really starting to listen to improvised music and jazz music in the 80’s, I would go and see people like Lester Bowie, Arthur  Blythe, David Murray, Bob Stewart, also people like Bill Frisell and John Scofield, but a lot of it had to do with this idea of revolutionary African culture, that was before this big jazz education thing really took off and I think when people like Wynton Marsalis -I think he is an incredible musician, I can’t think of anything better than him-, when he came to the fore front, those guys disappeared of the map, is like they didn’t exist anymore and I think the reason for that is that is very easy to teach jazz in a very mechanical, methodical way that essentially erases anything that is an inconvenient concept. They are not teaching Arthur Blythe, are they? I mean, Thelonius Monk is amazing, but if you weren’t him it’s really hard to teach that. So, you just have this gigantic kind of power structure and when you get something it’s big and very corporate, you are gonna lose the new ones to what’s going on.”

You come from a culture with a solid jazz culture, which include critics. The critics are important to create a jazz scenario in a country. Am I right?

“I think that is with any kind of art form through the ages: You are gonna have the artist and you are gonna have the people who can bring the artist and bring that to the fore front in writing, but you have to be careful, you have to understand that, for example, if you look at the people who are writing for the New York Times, jazz in American, and most everywhere, it has become… I don’t consider myself a jazz musician, especially in today’s standards,  I consider myself something else, so, having said that… In NY you have incredible musicians because their education is so expensive and the writers come from the middle class, if not the upper class of American society, and the people who write about them also come from the same culture. So, you have to understand that everything that’s been written is written from the viewpoint of people from that culture. It can end up being very limited, they can write about what they fell more comfortable about with than anything else. They are part of the industry.”

How does a musician build originality? You work with rock, blues, latin jazz… and other styles, but you still sound as yourself. Tell me about the process of creating yourself.

“Just practice every day, you have to realize for what you have an affinity for and go for that. When I was coming up to really wanna play blues and groove music that wasn’t cool, it was cool to want to only play Avant Garde, it wasn’t cool to play music that was unashamedly like not cerebral… and I went for that because it felt like what it made sense to me and I felt it was important for me what felt good and honest. Many people say to me “that’s corny”, so be it! Maybe I’m corny! And I have to go for it.

Now, because the jazz education thing is such an overwhelming industry, you can have people in Xalapa playing in the exact same way as people in Stutgart and people New York, because they all digest the same information in the same way. Information is fantastic, but is the culture that goes with it.

For instance, when I was in Guadalajara, for Tónica. Sara Valenzuela and couple of other people. They organize this festival, in which they have a bunch of musicians, mostly American musicians, coming down, playing gigs, but they also come to teach for a week- So you teach people on the instrument, and you teach people on ensemble. In my ensemble I had Silvana and Alex Lozano. And because it was like this jazz education thing, they were like “you need to play with your ensemble three songs, two standards and a blues”. And I was like “okay, guys, hand out on a second, you guys are from Mexico, right? Mexico has a deep folkloric music tradition. Do you have any songs you wrote? Let’s make this interesting, let’s make this fun”. And it turned out, this young woman, Silvana had all this tunes that she was singing. And I was like boom! I immediately got the chills! this is the shit right here. Don’t worry about this jazz education stuff, use that jazz information to play your music, so we did that and it was super cool.

At the Festival of Nuevo León I am going to play with Silvana and Alex. Silvana writes original songs that sound like folkloric songs, but they are more sophisticated harmonically.”

How was to learn from Joe Satriani?

“He was great! People don’t realize that he was just a local guitar teacher in the town I grew up in. That was the guy you went to, to learn guitar. He was a great teacher and a great guy too.”

“I am totally looking forward to it!”