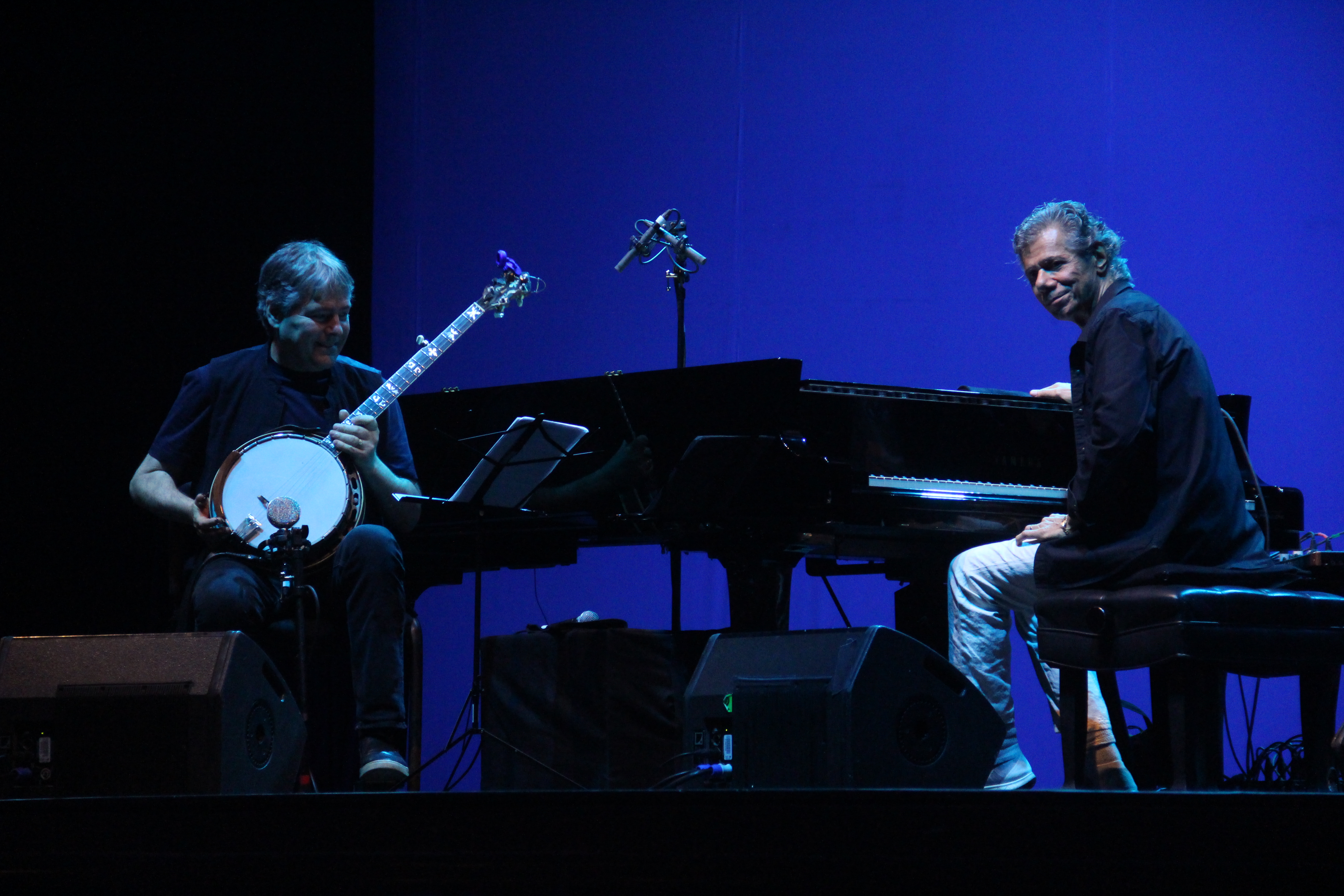 Knowledge shows the artist’s possibility to move forward, even when he’s looking to the past all the time. Last night, the Teatro Metropólitan didn’t just gave us an extraordinary concert, but also gave us a lesson about the meaning of being a real musician and composer: the artist who has actually studied all centuries of music evolution and who has managed to take it a step beyond what audiences are used to.

So, what happened last night?

The blue notes are the longs of jazz and these dominated the whole event. However, there was a constant travel through music of different cultures and musical genres. The night opened with a children song written by Chick Corea, which meant jumps among ragtime and jazz, with a structure that felt as a cyclic dance, a system that comes from the Middle Ages and it’s about always coming back to the main melody, thus giving us a notion of balance. It’s very sad that this song got hurt at the middle of its performance because of an impertinent change of volume that, fortunately, didn’t occur again along the concert.

Thelonius Monk came back to life in a melodic, dissonant scandal, managed through a super interesting counterpoint, riffs and rhythmic changes. The bebop went crazy with the unexpected formula banjo/piano: the themes “Bemsha Swing” and “Trinkle, Tinkle”, were a fantastic choice to make the piano possibilities bright. At the second theme we found some phrases that came from the moment when the Third Stream started existing, thanks to composers as George Gershwin.

Domenico Scarlatti, the baroque composer, visited us too. A piece written by him was played and I would dare to say that it represented an ode to the influence that Béla and Chick have from this musical era. It shows because they use many baroque progressions in some of their compositions and improvisations. I love that there is an implicit comparison between the sound of the harpsichord and the timbric richness and clarity that can be created with a counterpoint of the banjo and the piano. They performed two movements: along the first one we were able to appreciate pure baroque; in the second one, blue notes were added from the piano.

Interesting data: the banjo didn’t exist during the baroque, but it was an important instrument of cultivated music and it formed an important part in the origin of jazz. As Béla told me in interview:

“[…]the banjo started out playing African music, and in the very start of jazz music: when Louis Armstrong started there was banjo in the band so actually banjo had the right to be in jazz. And there was even better orchestras back in the late 1800’s and in the early 1900’s, people was playing tons of classical music on the banjo back then. Banjo was at the birth of blues and they kept playing banjos all over the place, American music started with banjo and then most of it got replaced by guitar.”

In the middle of the concert, Béla played a very interesting solo, a mix of bluegrass and a “corrido”, the Mexican folk song used during the Mexican Revolution. All of these interwovened with jazz harmonies. Just in case people didn’t notice it, I dare to imagine that it was somehow Béla’s way to say thanks to Mexico. Chick got into the song with a classical theme, a very Mozartian one, and jazz ideas.

Now, the classic music for the XX Century was part of the night too. “The Enchantment” is a composition of impressionistic ideas in the piano, to which Béla adds an European jazz dimension, that gets filled with color by certain flamenco progressions.

We also traveled to that point in which the country music and blues got mixed to inject the beginnings of 60’s rock. We could hear somehow a proto Led Zeppelin/The Doors in the banjo, hugging a hardbop played at the piano. The composition’s logic was always present, and emotions were clearly printed in each one of the notes played.

But this couple of genius also took us to the obscure sounds of Modernism. Chick Corea’s new theme, “Continuance”, alluded the melodic and harmonic possibilities that came from wonderful composers as Béla Bartók. By the way, Béla Fleck was name after him. Furthermore, Béla presented “Small Potatoes”, an original work inspired in serialism, a formula that influenced postmodern jazz. It’s funny because many people call Schrönberg the “Father of Serialism”, when this technique was actually brought to life thanks to Franz Lizst; it was used by his sun-in-law, Richard Wagner; and… at the beginning of the XX Century, serialism was used by the very forgotten, but fantastic, Bernard Herrman. In case you don’t remember him, he was the composer of the music for Alfred Hitchcock’s master piece Psycho, and other monumental movies.

Back to where we started, last night couldn’t miss the moments of pure bluegrass and jazz, the genres in which these musicians started their careers. Here you can also tell that ragtime is fantastic when added to the banjo. This formula gives us the impression of being in another sonic dimension, filled with timbres and well-marked rhythms. Even if you don’t believe it, dear reader, many “professional” jazz Mexican musicians, cannot sustain the rhythms, which is a basic and super important characteristic in this genre.

Corea and Fleck have achieved a spectacular musical communication, a product from many years working together. The brilliant technique of both of them together is something that every human being should listen to.

The true doubt I have here after experiencing all this creative wave, full with ancestral and modern knowledge is: How are we going to call this genre? I know we have the definition, which my dear Béla told me in interview:

“[…]I actually want to connect with people. But I also want to do very idealistic music, so I’m looking for that balance, that’s part of what I’m looking for: music that appeals for people but that also has those levels of complexity and history in the sound… and we could connect Africa, South America, Bluegrass, Classical, Indian and Jazz, I want it all to mix and make a song unique, a hybrid, and be itself and for people to love it”.

The name of the concept would be then: “the unique song” (¿?) Maybe… Perhaps we must keep studying until we find the adequate name of this wonder that is meant to be the future of real music.

In times like these, the cultural industry dedicated to brain wash audiences with short and insignificant pieces of music, having a Chick Corea and a Béla Fleck represents a true jewel for humanity and we must applause it with our hands up high.