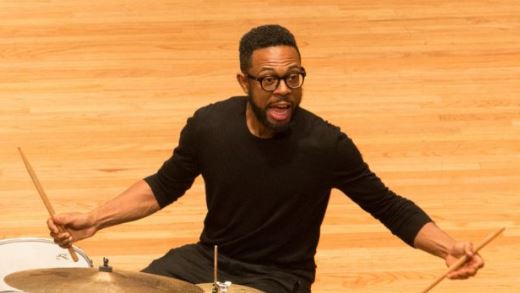 Jennings and Evans: The Key Points

Jerome Jennings Quartet is one of the best projects I’ve heard in Mexico, especially considering that bebop is a very difficult genre to handle. Let me tell you why.

In bebop, the tempo changes are very common, but Jennings is taking this this tool into another level and its a great decision. Probably being a drummer is what motivated him into present the development of each work with different accelerations and eccentric jumps that allow to create a peculiar dramatism in every exposition. We are not used to listen to things like this.

The concert presented arrangements to notable composers, such as Benny Webster, Thelonius Monk, Woody Shaw, among others, and an original work by Jerome Jennings. Even though, my favorite moment during the evening was “Bebop”, by Dizzy Gillespie, which is always going to work because its weird, long and complex phrases are very distinguishable. But, if we add to this the dramatic tempo changes by Jennings, highlighting the decelerations into those lines that are originally faster, thus creating a pop feeling, we find something new. If they would have taken this idea even beyond, maybe they would have reached an interesting homologue to concepts such as “Billie Jean”, by Michael Jackson. I know this was a good interpretation also because, even if I enjoyed it in the moment, this one persists in my head thanks to the genius of Gillespie and the personality that Jennings involved in it.

About Jennings’s composition, I cannot make a generalization, but I have this impression that the majority of gifted jazz players nowadays are way too attached to the regular formulas, so when they have to write their own work, they tend to repeat a lot, maybe this happens because they think too much. The opposite happens when they improvise, and this is probably due to the fact that across their careers they are more used to the spontaneous exposition of their own ideas. “Recy’s Lament” is the name of the song that Jennings wrote based on the story or Recy Taylor, an African American women from Alabama, who was raped in 1944, by six white men, and whose case prevailed without justice. The composition itself isn’t really a novelty, its introduction is very long and it sounds like any cliché of the sexy nighty jazz from New York, which only peculiar ingredient was Josh Evans, reaching for a new timbre with the mute on his trumpet, thus creating a similar sound to a nasal suffocated shout. In the middle, a piano solo, a slight mix of bebop and ragtime, with a little more accelerated tempo. Eventually, the theme changes into violent progressions, so you understand someone is screaming, there is Recy’s tragedy. At the end, everything goes back to the beginning, but with a feeling of a deep lament. The composition works because it has a story, but by itself it could had just been a stereotype with glimpses of something that could’ve been more interesting.

The concert was very bright thanks to Evans. He has clear influences from Miles Davis bebop’s era, Dizzy Gillespie and even maybe Arturo Sandoval. He looks for new textures and colors. In each piece he has something original to add. I think he has the skin of a real artist.

Every instrument in this quartet played with the volumes, the surprise loudness was used with perfect moderation. The communication of this guys makes you think of that from the biggest bebop’s projects from the past. It is exciting and it has a particular voice.

To sustain a bebop’s concert is one of the most difficult adventures that a jazz ensemble can consider, this is because. Firstable because when the guidelines that stablished the level of what it means to sound as a beboper are constituted by Charlie Parker, Dizzy Gillespie and Thelonius Monk, the scenario becomes really challenging.

Moreover, because a good bebop concert can be one of the most ecstatic experiences. Jack Kerouac used to talk about the adrenaline rushes inspired on the saxophones of his era, and he meant exactly what I am talking about. But, in the other side, when we have a lousy and poor bebop concert, it can be boring as hell. As I wrote on my last article, maybe this is the kind of soporific experiences that led people into think that jazz is hateable.

Furthermore, what does a bebop concert communicate to a Mexican audience? Being apart from an era or a concept, the unique that’s left for an audience of the XXI Century in a country as unaware in jazz matters as mine, is the possibility of experimenting a sublime moment or, in other words, they must like music just by itself. I mention this because bebop in its original context appeared as the enemy of swing, considered during the 30’s as the commercial superficial music. Whereas the swing represented the vanity, the bebop was the new intellectual music. Bebop took music from the dancing halls to the concert. Although many of us differ with this idea now: swing can be complex and intelligent and bebop can be danceable.

This makes me think that an artist doesn’t need to compete with the idols when he finds his own voice. Jerome Jennings Quartet is on its way, I respect it and I’ll be following it. It has all the elements to bring us a dynamic, interesting, surprising and even spectacular concert. This is wonderful because far from the tendency of adding more and more genres to find novelty in eclectic music, Jennings is making his bet on bebop itself, and its mere aesthetic functions, such as tempo changes, timbres and uncommon discourses.

DeQuinta Producciones did a great job by bringing this project to Mexico.