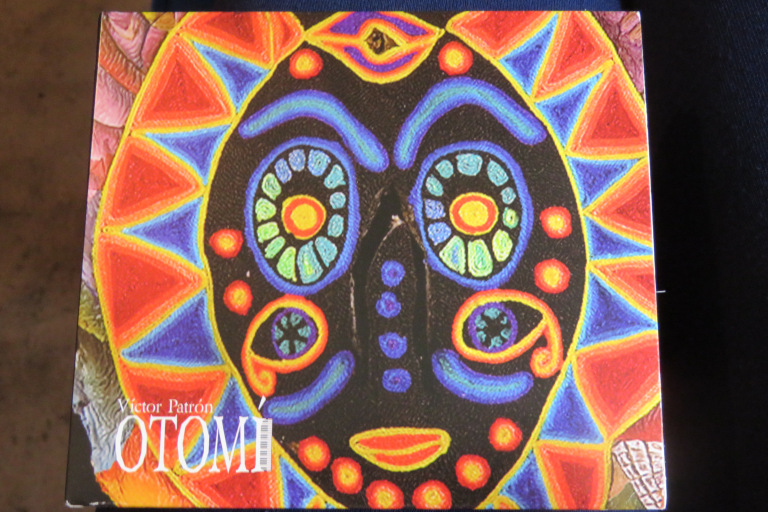 Jazz has passed through many cultures, and as such has become a hybrid of the many sounds of the many scenes it has had contact with.

Victor Patrón, with his album Otomí, recovers pre-hispanic whispers and adapts them to different lines that can be accomplished only through jazz of meditation*. We also see an interesting mosaic of arrangements and instrumentation use, from an acidic electric guitar, indigenous percussions and whistling, jazz percussion, wonderful piano, interwoven pre-hispanic voices, the surprising use of a melody horn, vihuela and other instruments, added to a chronic nostalgic tone.

It is a material whose objective is to celebrate the existence of the Otomí people. This album has many great aspects and valuable creative spaces. However, there is something I would like to question: How much does a musical genre add to another? In this case, the indigenous music to jazz and vice versa. It is clear that this question must be answered through an analysis of each particular musical product.

The other day, the Mexican saxophonist Gerry López, was asking the question via social media whether or not the addition of pop to jazz could create a mass musical movement… To begin with, I think that jazz has had the chance of being popular music, for example during the swing era of the 1930’s, with the orchestras of Paul Whitman or Fletcher Henderson. These made jazz the coolest and most consumable music of those years. What if we look at the famous Betty Boop cartoon, in which we heard Cab Calloway so many times? There are so many other examples. In fact, it is obvious to think that Gerry was talking about the genre that we define as pop music today: simple music, melodic and characterized by songs of short duration.

Jazz music this has been fused in wonderful ways with different expressions, such as tango, bossa nova, samba, progressive rock, and other kinds of music. But, what happens when we want to make jazz-pop? What is that about? There is a music video in which a jazz band takes the lyrics of a Justin Bieber song, but the music is all about funk and jazz fusion; I found another similar example in which another jazz band uses the lyrics of ‘My Heart Will Go On’ over a swing melody that has nothing to do with the original music of said song. Interesting, to take something super popular and transform it in order to make it disappear. At least Jamie Cullum is more subtle when he reconstructs Rihanna or Taylor Swift’s material.

Now what happens when we actually combine two musical genres, as in Otomí?

A part of me totally agrees in combining arts, creating styles and, most of all, making honest proposals. I think this album was created with very good intentions. However, I can’t stop feeling a little uncomfortable with this mix of indigenous sounds and jazz, to the extent of not knowing if this actually a bit pretentious. At some point, listening to Otomí made me think about Alice Coltrane or Ravi Shankar, because, even though the concepts are totally different, there is a spiritual conduct through all of their compositions, and you can feel that same conduct in the production of Patrón. Although, if we keep our eye on the mere musical and stylistic function, there are some fractures and combinations that don’t necessarily add to the result but rather act to the contrary. I think jazz contributes excessively to a genre (Otomí music) whose only actual grace is the echo of nostalgia for a human group, whom we don’t know for how long will survive the process of globalization.

I perfectly understand the historical value of the existence of any human group and the wonder of documenting it in music. But I also think about the present, in which the development and the evolution of knowledge and arts makes them greater. Why would we hold on to an artistic form that had already accomplished its function some time ago?

The Mexican composer Miguel Almaguer told me some time ago in an interview that:

“I think it is interesting to think about the origins: since the music wasn’t born to fill only one necessity of human beings, it was born to fill many necessities. When tribes got together in rituals they had music to fill a need for dance, an instinctive corporal need, a religious need, a social communion need, an intellectual and philosophical need, a need for the transmission of knowledge. As the music and the needs evolve, they specialize and separate: There is music to dance, music to socialize, music to transmit very specific ideas and histories”.

The thing here is that we are living a historical moment in which we are more conscious of what is going on with music. Yes, it is an art, it is a fragment of humanity that has to do with what is sublime and spiritual; but if there is something that makes us human it is our capacity to understand and explain with words what we are feeling. Thanks to this we can say when we have some valuable music in front of us, why it is valuable and what the human need is that we are satisfying with it. Let’s not forget that the most valuable thing about jazz music is its capacity to play with sound and silence, to the extent of being transformed in short periods of time: in only one century, jazz has evolved in such a way that it has given birth to at least one subgenre per decade, on average. This is why it can easily get along with genres such as those I mentioned before (samba, tango, etc.). I listened closely to otomí music and I found it is actually very precarious, and I can’t see how its language could be compatible with jazz phonetics.

I am very interested in the inclusive part of Otomí: the concept of getting cultures together through music and the idea of enhancing respect for human beings and their struggles, which has been an important function of art. As Eduardo Piastro says (Estefan and Ferra, p. 58):

“This is what UNESCO says about jazz: • Jazz breaks barriers and creates opportunities of mutual comprehension and tolerance. • Jazz is an axis of freedom of expression. • Jazz is a symbol of unity and peace. • Jazz reduces tension between individuals, groups and communities. • Jazz foments gender equality. • Jazz reinforces the role of youth in social change. • Jazz promotes artistic innovation, improvisation, new forms of expression and the integration of traditional music into the modern music forms. • Jazz stimulates the intercultural dialogue and it facilitates the integration of young people from marginal environments”.

But! Art matters in its own right! Condescending thoughts can’t help us to evolve. I admit Patrón is a great musician, it is wonderful to hear his live improvisations, and I think he is accomplishing the social function of the project Otomí. However, to be brutally honest, I think that only the jazz part of this album is what actually saves this production. I wish I could fragment it and leave aside the intrusion of the indigenous sounds that limit the proportions of a great project.

What UNESCO says is very sweet and I agree with it. But the first function of a musician is to make music; after this one we can find (in a totally circumstantial way) the great contributions or the terrible faults to art. I can’t stop myself from repeating that complex music creates a greater development in the cognitive processes of those who listen. Hence, we are not going to dilute jazz and, even less, transform it into another music using its name, because the value of jazz has to do with its complexity of original structures that for its own nature are open to a constant evolution. Right after this we can talk about the other consequences of jazz. The fact of jazz having a social positive function in many historical moments shouldn’t lead us to the confusion of mixing the two separate phenomena. A social function isn’t the first objective of art.

*When I talk about Jazz of meditation I allude to the opinion Alice Coltrane expressed about her album Universal Consciousness: “This title means cosmic conscience, self-realization and lighting. This music tells about the different roads and channels through which the soul must pass before reaching the solemn state of absolute conscience” (Berendt, 1986, p. 205).

Special thanks to my dear friend Miles Hurrell for proofreading the final version of my text in English.