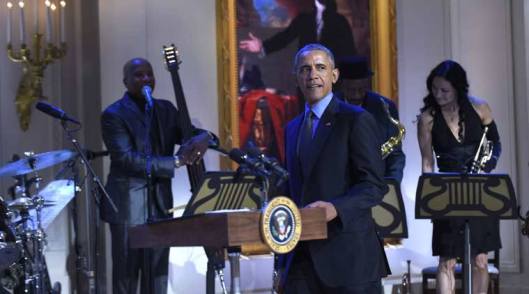 I took the liberty of transcribing the speech of Irina Bokova, the Director General of UNESCO, who spoke at the celebration of the International Jazz Day in 2016 at the White House, because it seemed very pertinent to me to share her ideas these days of political crisis.

Obama is one of the few leaders in the world who supports jazz. Ironically, the few last days I have seen commentaries of people involved with this genre who dare to approve the possibility of Trump not being such a bad President, something that creeps the hell out of me. The propaganda level of this monster is taking advantage of the small amount of information of the public, and it is justifying acts of injustice and violence around the world.

Something that I learned with my career is the impact of the messages through media. I don’t understand those who forget what happened thanks to Goebbels’ and Hitler’s propaganda, who took fascism as the normal structure of a lifestyle. And it was not just that, they disappointed musicians who supported them at the beginning; those who believed that totalitarianism would force people into listening the complex music of the XX Century composers. However, the answer was different: a propaganda against artists began. The Nazis threw away paintings that were considered threats against the system because of their “incomprehensible nature”; the same happened to music. Jazz went through hard times, because the leaders saw it as degenerated music, a cultural blasphemy, most of all because it was created by black people. Nazis hated the “informality” of improvisation, to them it meant the antithesis of high culture.

Today, now that we are in this practically impossible to win race, in which the villain has the power to promote his image everywhere, I consider that we, artists and journalists, should raise our voice, as the greatest representatives of the genre did, some activists even died for the cause. Let’s make a great use of internet. Since jazz is my subject, I won’t let people forget that this music is not only a great demonstration of creative and emotional beauty of man, but it has also helped building a speech in favor of peace, human integrity, freedom and dialogue.

Billie Holiday wrote in her biography that while she was in a tour with a band of white musicians, she was the only one who couldn’t have a hotel room or eat inside the restaurants, for the colour of her skin. She said there was a white singer who used to treat her offensively; the orchestra that was traveling with them had to carry both (a white girl and a black one), in case they weren’t allowing Billie to play. There was a time when a stage didn’t even let the white singer get in to the show, just because she was a woman. Nina Simone screamed to talk about freedom; Bessie Smith had to die without medical care because of her race; Ornette Coleman wasn’t allowed to work as anything else than a janitor, for years of his life. So many idols defenestrated by a society that looked more like hell than anything else. So many struggles, those voices of freedom, Malcolm X and Martin Luther King willing to sacrifice themselves for the wellness of a humanity with values. And now, just like that, Donald Trump comes with his speech violating any kind of harmony between individuals. Why do we allow this? I am not talking about those who voted for him, but also about those who justify his presence in front of the power, with their hands on their waists and their eyes closed.

If something distinguishes us from other species it’s our capacity of thinking and, maybe, of loving. Dear readers, let’s stop acting as beasts, marking territories, pointing fingers at others, feeling proud of or underestimating the color of our skin, sexual orientation, genre… Heterogeneity is one of the reasons why we are so wonderful, as the white tiger, as the Bengal tiger… In a world after two World Wars, no one would have to feel superior or inferior, other than to show their imbecility.

I invite you to read, listen and share this speech. I wish there were more politicians supporting jazz, not just because it is extraordinary and sublime, but because of all the discursive spectrum which was attributed to it through a history of beauty and disgrace.

Speech of the Director General of Unesco, Irina Bokova, at the Fifth Celebration of the International Jazz Day at the White House in 2016:

“What an incredible evening. Mr. President, distinguished guests, I’m very honored to be here with you  this evening. And thank you very much Mr. President for having us, opening the White house for this fifth celebration of the International Jazz Day. Tonight indeed the White House has turned into a jazz club, a blue house; as you said, but what is most important for us is that we celebrate jazz as a dialog among culture. It’s human rights, its quest for freedom, and for human dignity.

Jazz was born in this country but now is traveling all around the world. It has helped shape the American spirit and now it is own by all the people, all over the world. And this is not only that jazz is a great music. It is because Jazz carries strong values, jazz is about freedom, about courage. Renewing itself every time it is played. And we will be seeing it with every single minute in this evening.

Jazz is about civil rights, is civil dignity. It was the soundtrack of struggle in this country and I would say beyond. But jazz is also about diversity. Thriving on roots in Africa, the Caribbean, Europe and elsewhere. And through jazz we learned about discrimination, about racism, but we learned about pride and dignity. Through jazz we improvise with others, we lead together better in dialogue and respect. Jazz I believe touches our hearts, and souls and influences the way we think and behave. And this is why UNESCO created the International Jazz Day.

And I believe this is something that we share with the United States, the conviction we must nurture and harness together the power of heritage, education to promote universal values. Because culture and human rights go hand in hand and those who seek to fragment humanity always start with culture, in response we must sing, we must listen and we must share even more culture, heritage and ideas, and I remember the sound of hundreds of drums playing on Congo Square* on New Orleans. The first year we celebrated the International Jazz Day in 2011, and I think is still here the drums of Congo Square, today here in the Withe House in the sound of artists from all over the world together, united, singing for peace, for freedom and for respect.

This is what jazz is all about, and this is what UNESCO stands for and we are honored to share this with you in the United States, and with the world.

Thank you, Mr. President, it is a big honor to be here with you this evening. Thank you”.

*Congo Square (1817) was a space in which slaves were allowed to get together. They used to dance and make music with anything they had in their hands. They elaborated complex rhythms: the first shapes of jazz.

*Special thanks to Miguel Almaguer and Hernán Rocha for helping with the proofreading of this text.