The singer of this new jazz era, who mixes lots of hip hop, R&B and pop, and whose voice is already known all over the planet, came for the first time to Mexico, to sing us in the  Lunario del Auditorio Nacional. Thanks to that, I had the great chance to talk to him about art, music, and his life as a new jazz singer. The result was incredible.

I think it is very difficult for an artist to find its own identity. Even more, maybe, for a singer. So how did you find yours? Your own sound.

I don’t think I’ve found it yet. I am experimenting with a lot of sounds and I think it is a complicated question because every singer has the sound of their voice already, you were born with it, you can’t really change it. And actually, it took me a long time to like the way I sing, but once I stopped fighting my sound, then… mentally, physically everything kind of flows. So, I think people follows my music styles because my voice sounds kind of the same whether is jazz, R&B, soul, hip hop, whatever. But I haven’t found my like… my sound yet, I think.

Because it is very impressive, I mean, you are very young and… actually, I want to know what is your story because becoming famous in New York is actually pretty difficult but now you are travelling all around the world. How did that happen?

How much time do you have?

Haha! All the time you want.

“I am from Minneapolis, which most people know from Prince, and… any Janet Jackson fans know that Jimmy Jam and Terry Lewis also produced a lot of her hits there. Minneapolis is a great town for a lot of different styles of music. Right now hip hop is big there. When I was growing up, obviously Prince, Minneapolis funk was big, and then indie rock became big and jazz has kind of always been big between there and Chicago. So it was a cool place to grow up.

I knew I wanted to go to New York to try to get a record deal. It was always my dream to be on Blue Note Records, I was looking at their album covers and think ‘someday I’m going to be on that label’. I moved to New York a couple of times, it took me a while to connect with people. You know? You have probably heard this a lot but, if you are good at home you are average in New York, so you realize about that and I think it´s more like an ego adjustment, because you think ‘I’m gonna show up in New York and everyone is gonna love me’, and nobody cares because everybody is that good, so you have to be even more unique. So, I think New York really forced me to sort of define who I was, and pretty early on I realized I wasn’t only about just jazz standards. I gave for my first album The Dreamer all originals except for one cover, which is Freestyle Fellowship a hip hop cover song so pretty wild disco, but focused on what I wanted to do, which was to combine genres together.”

Love in Time of Madness, what is it all about?

“I think it’s my foray to contemporary R&B, musically I wanted to make music I wanted to listened to. I love contemporary production, I love James Blake and Kehlani and that kind of new movement in LA that started with Flying Lotus and Raï’n’B Fever and all  those new, I guess ‘bedroom producers’ we can call them, with the laptop. And I met this kid “Tario” (Antario Holmes) who is an R&B producer and he sort of was exactly what I was looking for, very musical, but very now. He is an amazing pianist too.

And… conceptually is really about my love of Motown, Marvin Gaye, artists like The Weekend, Beyonce, Drake. You know? There is a new wave of hip hop and R&B, that is realy exciting. Some of it is very political, some of it is party music, and I think we´ve found the cool states now, we can live in both, it doesn’t have to be just one or the other. And that’s pretty new, I mean “What’s going on (Marvin Gaye, 1971)” is still a pretty recent album and there have been a lot of big political statements, not that this one is, but I am fine with it, that in R&B there is more room to talk about wide scope of relationships and politics as well.

Now that you are talking about that… Is there any responsibility of the artist to talk about what’s going on?

I don’t know actually if it is a responsibility because if I say ‘yes’ that means every artist has to. And not every artist… is not their gift. Like for example, I am pretty good friends with Saul Williams and he is an amazing leader, and he is very political that’s a big part of his work, and his spirit and his performance. For me, I am not that kind of leader, for me people respond to more crooner, sexy,  you know making you feel good. But I think that is a powerful itself and I thought about it with this album, I think right now with what’s going on with police mortality and discrimination against Africanamericans in US, and Latinos as well, I think it’s  a political statement, and a political act to make love songs and to say ‘you know what? I’m not defined by slavery, I’m not defined by discrimination, I am a whole person who has a rich life and I have the freedom to create’. So I think it’s ‘yes’ or ‘no’, everybody should be true to where they are at that moment. But we´ll say,  I think it is important for the artist to say where they are politically: I don’t support Trump, I don’t support his administration, I don’t support any of his views, and I think it is important to say that, and people know when they purchase your work that you are not supporting some hidden racist sexist agenda.

Obama was actually creating concerts, bringing music to people. Trump is very dangerous with his messages and I don’t know what he is going to do about the music. But, what do you think about that?

I think thankfully there is music and there is the music business, right? And music existed long before the music business. Music is never gonna go away. You could cut all the funding tomorrow, worldwide, to all arts, and we would still continue to create beauty because our the music is a way for human beings to taken very complex thoughts and emotions, and give them back to society in a very interesting way that sort of leads you to see the world in a different way. Like I am surrounded by beautiful art work (he points at the pictures of the gallery Ángulo Cero) right now, even like just this lines guiding you eye and making you think like ‘ohh!! All this thing are invisible in nature, to the naked eye, but they exist on a level that we can’t see’. You know? Artists can… even something like that can start your brain towards a new way of thinking, so Trump can’t change that, Bush didn’t change that. I think, if anything, they make a lot of artists respond more forcefully, and a lot of great artists are creating in a time of madness.

Do you think this is a new era for jazz music? Because it is still jazz somehow, but you are adding a new styles to it…

I think it’s a new era for just music of all styles. I think it’s a new era for artists because now you can say ‘Jose James’ and you go to Spotify and you get all of his music, and all its related stuff, that’s what’s cool about it. If I putted Barbara Glasper I’ll probably get some jazz feeds and I get Erikah Badu, and I’ll get the roots. That’s how I discovered really everything, by looking at line notes, but now Spotify makes it easy for you, Apple Music makes it easier for you, so I think across all the genres, if you can embrace the technology it’s a new era for everybody. 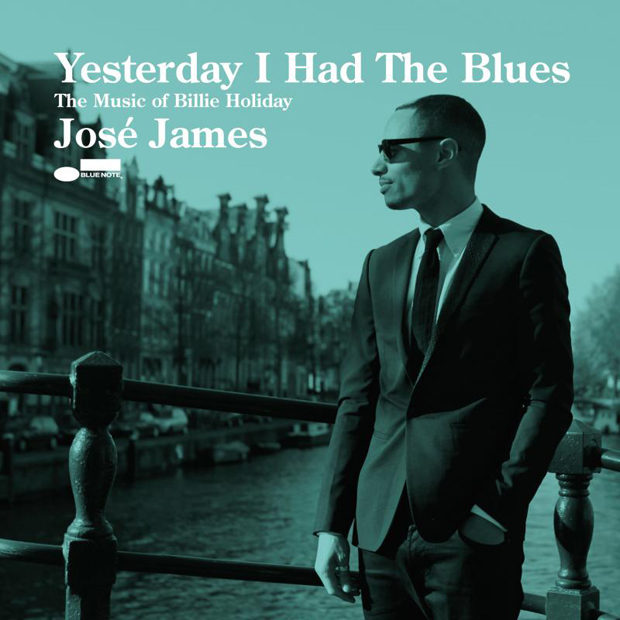 So, Yesterday I Had the Blues. This album you created with songs of Billie Holiday… Talk to me about your heroes… and about this album.

Billie Holiday is really my first memory, when I was three years old. I remember going through my mom’s vinyls and looking at the pictures and I pulled out hers and it was like… black and white, that classic photo of her, the flower in the head looking off, and I was stroked by that image. Billie Holiday has always been a mysterious figure in music and art for me, enigmatic and just fascinating. I think she is really the reason I got into the singing jazz and learned everything I know about singing jazz from her.

So, two years ago was her centennial and so I wanted to pay tribute to her and also show my fans what she’d been for me. Interesting thing about her is… after wonder while making and touring that album what she would have sounded like today. Like if you think about a super street wise young black girl from Baltimore, what would she sound like today? What kind of songs would she write today? What kind of producers would she work with? That was kind of interesting to think about: how time and landscape changes and…

I mean, Billie Holiday is huge for me Marvin Gaye is huge for me, John Coltrane, those are my top three most influential artists.

Wonderful! So, is there anything you would like to add to the Mexican audience?

We are totally excited!

Yeah, and that’s really cool It’s a very interesting thing. I’ve never been here before but I have all this fans I get to all this friends. One step on stage and I know people is going to be like so ready… I just wanted to say thank you for all the support, all the love and let’s make some music together.