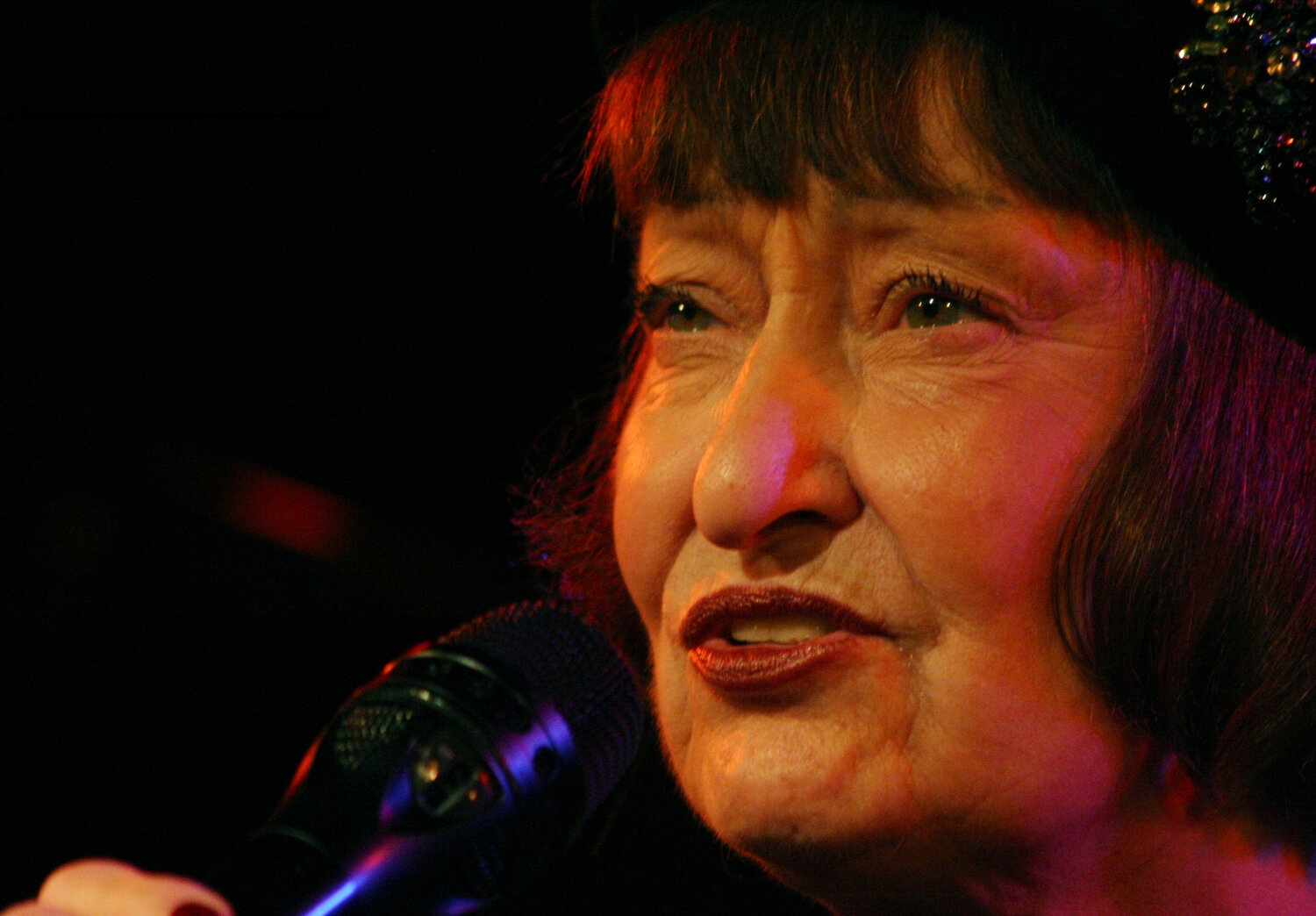 She started singing during her childhood, but when Sheila became a teenager she discovered bebop and became friends with Charlie Parker. Starting from that she decided to dedicate to jazz forever. Even though, it was until the 60’s when she started her recording career and she’s been improvising since. Today, 91 years old Sheila Jordan is still characterized for having a vocal technique that makes her different from  other jazz divas, but still gets her -for its story, perfection and bebop’s soul- into what many of us journalists call “the last great jazz singer alive”.

E: What is the history of jazz from your own perspective?

S: It’s been around, it’s an incredible music and it’s not respected in the United States the way it should be. It’s never been accepted properly, I called it “the stepchild of American music”.

I don’t know why that is. For some reason it just doesn’t get the attention that other music gets, that’s kind of sad but I’m here! And all the other jazz musicians too trying to keep it alive, to keep it going, and that’s my purpose in life: to keep jazz alive.

E: How could you describe your life through this music?

S: I started singing since I was a little kid, 3 years old. I had a very unhappy childhood, sad, very poor. I come from a native background on my mother’s side of the family and my grandparents raced me since I was 14 in Pennsylvania, because my mother was too young, she was only about 17 years old when she had me. My father left my mother while I was born. Then at 14 years old I moved back to Detroit to live with my mother, and went to high school there.

I always sang. I didn’t know what kind of music I wanted to sing until I was on high school, the first year I went to the jukebox across the street, where they had hamburgers and you’d had your lunch, and I saw in the jukebox I saw Charlie Parker’s Ree Boppers and I threw up that one I wanted to know what that’s like. So I played it and I heard Charlie Parker for the first time and it changed my whole life, I said: oh, that’s the music I’ll dedicate my life to, other I sing it, play it, support it, whatever, it just changed my whole life and I’ve been on my journey ever since, trying to keep the music of jazz and bebop alive, and Charlie Parker and all the disciples of Charlie Parker, like Miles Davis, Max Roach… you know? I married Charlie Parker’s piano player Duck Jordan, that’s where I got my last name.

E: How was being white (we must remember that Sheila is actually native) in a culture of black people’s music… and being a woman?

S: It was very difficult being white because Detroit was very prejudiced, they would not like black people, especially a young white girl singing with African American kids, so I had a hard time, but I never thought about color. You know? I didn’t have that kind of thing growing up because of having been prejudiced against myself for being native… you know?

E: I am sorry to hear that.

S: Well, that’s the way it was then, it’s kind of getting better but still not great. But, you know? I stuck in there, most kids wouldn’t keep it up, they would have said “I can’t go through with this”, but the music was too important to me and I wanted to be around this music and in order to be around it I had to be in a culture that wasn’t accepted in Detroit, Michigan, or in the United States for that matter, there was all that hatred for Afro Americans, especially if you were white and you wanted to be with your friends.

It was so difficult, but I never gave up because I loved my friends and I loved the music so much, so I decided “that’s their problem… if they want to be prejudiced, I’m gonna keep it going even if I have to stick up for them or be chasing down to the police station and be questioned for being with my friends who happened to be Afro Americans”. It was difficult, but I stuck in there and I’m glad I did.

E: Tell me about your relationship, your friendship, with Charlie Parker.

C: He was my hero, he’s my guru, he’s the reason I sing music. I love him, I love his music, he was a genius, nobody played like Charlie Parker and he changed my whole life. I met him when I was very young, he became like a big brother to me and we became very good friends until the time he died. He always supported what I did and he was wonderful.

E: People never talk about the “good side” of Bird, but he was very intelligent, always reading…

S: He was a genius! He was brilliant! He was very smart, but he had a terrible powerful disease, alcoholism and drugs addiction… but that doesn’t change the fact that the man was a genius. Unfortunately, he didn’t live enough to find the cure. He was 34 years old when he died and it was very sad. I was very sad because he never got straight, he died being an alcoholic and a drug addict.

E: Not let’s talk about something happy… you and music and poetry…

S: I did a record of music and poetry with Steve Swallow.

E: But, I mean… how do you link the lyrics with the music? You are a great improviser!

Haha! I don’t know, I got it from Bird, I just do it, I mean… it’s part of my life, it’s like I have to eat to live, I have to sleep to live, and I have to sing to live… and I have to improvise to live, it’s an extension of what my being is, so it comes very natural to me.

E: The influence of instrumentalists is very clear on your technique.

S: Everything! Charlie Parker was my main influence, more than any singer. I love all the singers but I didn’t have any money so I couldn’t afford to buy any records. When I got a few pennies together I bought Charlie Parker and bebop recording so I could learn that music I loved.

I love Billie Holiday, she was the greatest singer as far as feeling and telling a story. Sarah Vaughan had an incredible voice going, the most beautiful at any voice I’ve ever heard, and Ella Fitzgerald was the greatest scat singer I’ve ever heard to this day. But when it came on what I wanted to do, my influence came from the instrumentalist which was at the time Charlie Parker. And maybe I am a frustrated horn player, I don’t know.

E: You said that in another life you would have chosen to be a counter bass player.

E: You’ve seen many decades, different music. How do you feel about all those changes?

S: People do the music that turns them on… my music was bebop music. So… everybody has their choice. I picked bebop music, my favorite way to sing is with the bass, I love the bass, I have a bass and voice duo, I’ve been doing it, as I said, since the early fifties.

I started out with Steve Swallow when he used to play acoustic bass. Then he started to play electric bass and I don’t want to do voice and bass with electric bass, so I would sing with the great Steve Kuhn Trio and we had a group together… and I met Harvie Swartz and then I started to do bass and voice with him… and then, after 15 years he decided that he wanted to concentrate more in his own music and group, so he didn’t want to do the voice and bass pretty much anymore. Then I met Cameron Brown, we have a duo that I’ve had for years now, Brown is a wonderful basser and I still do many concerts with him.

E: What would be your advice for jazz singers?

S: Keep singing, don’t give up. Don’t let anything disappoint you or try to slay you away from what you want to do. We need you, keep the music alive. Keep jazz alive. Support it until it can support you. And that’s what I did: I worked in office job, I typed… but I always found a place to sing my songs, not to pay my rent, not to buy my food, not to have been raced my little girl but I did it because I needed to have music in my life so, in order to do that, I had to have a job where I could earn money to pay all my bills and that was typing, being a secretary. I did that for years until 61 years old, then I started to work more music fulltime. Hey! It (jazz) might never support you but you never give up something you love!

E: The art world has few women, why is that?

S: Because they’re not accepted. There’s a lot of great players out there that are women, great singers, great instrumentalists, but they’re not accepted, so a lot of times they keep doing it but some of them give up and that’s what I don’t want to see happen. Keep doing it until it works. There is a man’s world and there are great players, a lot of great women, we need to work on that. We need to forget whether there are men or women, let’s just figure out how great they play and enjoy their playing regardless of their sex. We have to stop categorizing.

E: You are still singing!

S: Of course, I wouldn’t be alive if I couldn’t sing. I’m 91 years old and I want to do this music until it’s time for me to leave the Earth and I hope wherever I go when I leave here I can sing also, so that’s my wish. Also teaching and keep the music alive through teaching singers. I love teaching as much as I love performing the music.

E: Is there anything that you would like to add?

E: Thank you very much, dear Sheila. You’re truly an inspiration for all of us, jazz people, to keep working hard for what we love!